This was the big day – over the Julian Alps via the Vršič Pass. It was a sunny morning which was great for the views. It’s about a 13km ride to the top of the pass (1611m), with approximately 800m of climb. The road is quite steep, but would be much worse if it weren’t for the hairpin bends. Each of the bends is cobblestone and a bit bumpy, but has a numbered sign with the altitude which gives a wonderful sense of progression. There are 24 numbered hairpin bends to the top. Along the way there are huts, hikers, and some of the best views around. 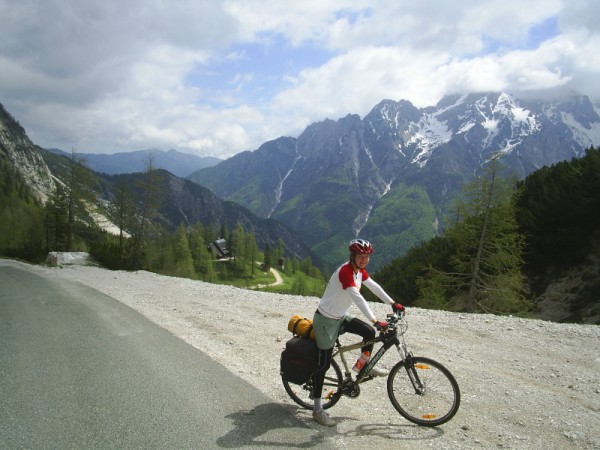 Millerine close to the top, with a view back at where we had come from 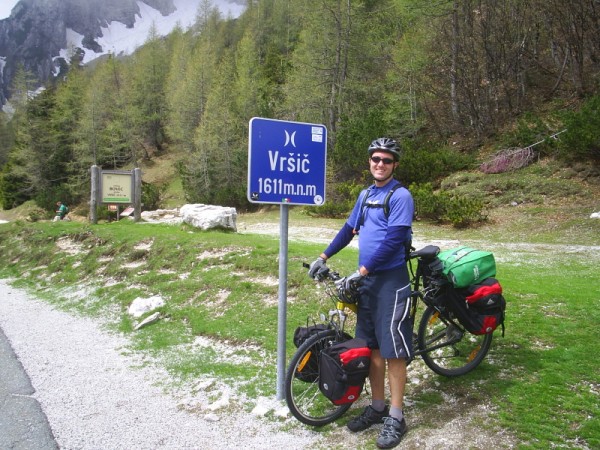 Wally at the top of Vršič pass

The 26 hairpin bends on the way down were very fast and fun, and with even better views. At the foot of the mountains we met up with the Soča river which we followed most of the day. At its best the Soča is supposed to be a bright emerald green. It was quite cloudy for us because of all the rain, but still a beautiful green. In fact the whole day there was very little that couldn’t be described as beautiful, including the place where we had lunch by a footbridge over the river. 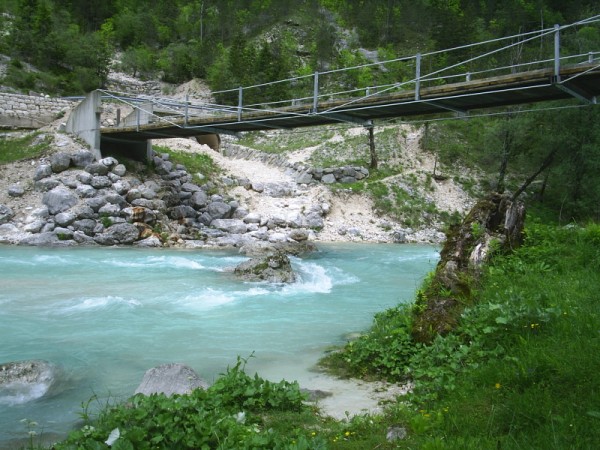 Lunch spot on the Soča River

We stayed the night in Camping Vili, which was a minor highlight in itself. It was right beside the river and Vili himself was a very talkative and energetic character. He also cooked a good dinner of trout and allowed us to dry our shoes in their house. Basically it was a very homely and welcoming camp ground.

I had been looking forward to this part of the trip and it exceeded my expectations. The climb was hard work, but wouldn’t be too much of a challenge for most seasoned cyclists, and it’s worth it.

Yet another rainy day, but an easy ride. There was a rise leaving Bled, but from then on it was an easy day. Around Mojstrana a proper bike track off the main road began. It started off as a rough gravel road, but eventually became a fantastic sealed road that went all the way to Kranjska Gora and beyond. At one point the clouds retreated a little revealing the view of the Julian Alps, which were quite impressive. The road goes alongside Triglav National Park and is fairly flat. Fantastic views and an easy ride.

Although we made it Kranjska Gora fairly early, we were soaked and it seemed a good idea to leave the crossing of the alps until the next day. We checked into a guest house and went for a side trip to near the Italian border. It really is a fantastic place for cycling. There are a bunch of very good bike tracks around the foot of the alps and on through Italy.

Kranjska Gora looks to be a ski resort village, but is also a base for outdoor adventures in the Julian Alps in summer. Climbing Slovenia’s highest mountain, Triglav, is quite a popular pastime. It’s not an easy trek, but I understand there are routes you can just walk up. Come prepared for a few days of walking and it should be doable. There are other tracks of varying distance and difficulty around the Alps.

It didn’t look like there was anything interesting between Ljubljana and Bled and the weather was still bad, so we took the train. There was a short ride from the station to the town, which we rode to before going to the campground. Bled is incredibly touristy, but with good reason. Bled lake is quite small and very photogenic, with its island and castle. There are also a lot of adventure activities like canyoning and white water rafting. 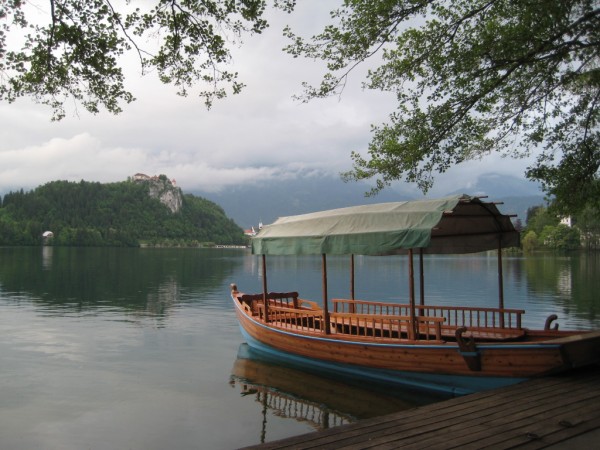 Lake Bled, with the island and castle in the background

On the first day we had a few drinks and chilled at the campground. In the evening I went for a bike ride up a nearby very steep dirt road that went for about 5km before opening out to a very peaceful meadow with a few buildings. It was a rough track and more suited to a properly equipped mountain bike than the 1.75″ slicks I was using. The ride back down was still very fun though.

On the second day we visited Vintgar Gorge a short distance away from Bled. It’s a lovely narrow gorge with a walkway following along the rapids, ending at a waterfall. Our photos don’t do it justice, and I highly recommend this place. 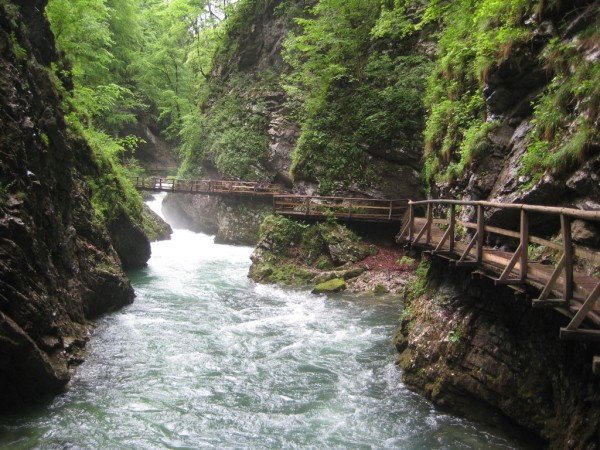 In the afternoon we went white water rafting on the Sava river. It was far from extreme, but fun nonetheless. We finished up at the farm of the people who run the place. They had a heap of animals running around, and they gave us a shot of their homemade spirits which was impressively strong, but reasonably drinkable.

Bled was perfect for a relaxing escape from riding in the rain. The lake was beautiful and the campground was one of the best we visited on the trip.

Our original plan for this days ride was to ride the 45km or so to a campground at Kamnik and perhaps beyond to Ljubljana, but it was such a dreary wet day that we changed our plans and headed towards the safety of the nearer train lines around Šempeter.

We only made it a short distance before we gave up and caught the train from I think Polzela. Being cold and wet isn’t always fun when there’s the possibility of being dry and warm somewhere. Catching the trains at this time of year was pretty easy because there weren’t too many people. I understand it can be difficult with bicycles sometimes though, as it’s entirely up to the conductors whether or not you can take them on. The first train was memorable because of the duck noises it’s horn made as it went past the villages.

In Ljubljana we again opted for a guest house near the station. It’s a very nice old town with a great castle, but nevertheless I would have been happy to skip it if we hadn’t taken the train. 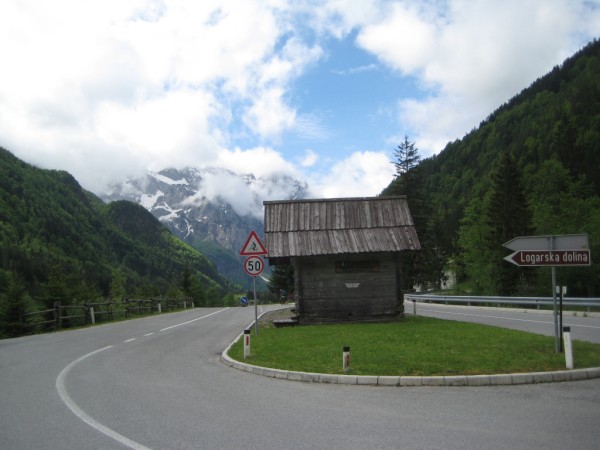 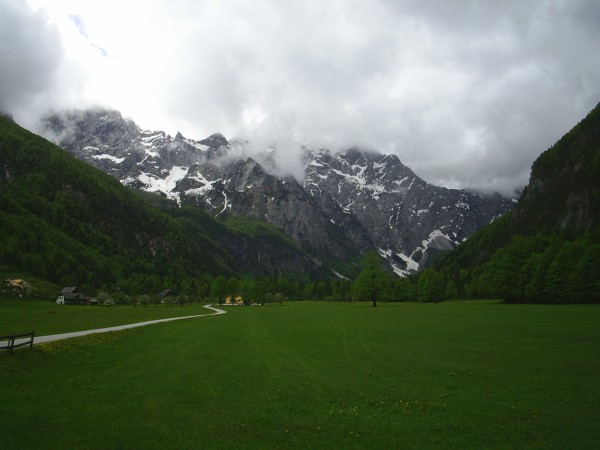 We woke early and did the final 20 or 30km to Dravograd by morning tea. We followed the main road along the river for the most part, but towards the end a sign sent bikes on a detour along some quieter roads. There were a couple of climbs along this route but they were short and no problem. The route along the river Drava between Maribor and Dravograd is quite beautiful and doesn’t have too much traffic.

In Dravograd we found a cafe that did terrific cakes, then continued along the river Meža (more of a creek) through Ravne na Koroskem, Prevalje, Mežica, and Črna. In Črna we had some pizza (the cheapest eating out of the trip at €3.50), then asked the locals about the road we had chosen to Solčava, and they said if we were in good condition we could make it. We thought they were implying it was reasonably easy, but it turned out to be the hardest part of the entire trip.

For the first few kilometres we followed a creek up a gentle climb, then we hit a very steep dirt road and a lot of rain. It was wet, cold, and very hard going up the slippery gravel. We even pushed the bikes for about half a kilometre. It took about 2 hours to go about 13km to the top of the pass. I think the climb was from around 500m to around 1400m. It was very beautiful, but, exhausted and cold in the rain, we didn’t have an opportunity to appreciate it (or take any photos). This was followed by a very steep downhill, which was just as hard because our exertion had been keeping us warm and now we froze. We finally made it Podolševa and hid from the rain under the eaves of a farmhouse.

When the rain settled we were given directions to a guest house, Majdač, a few kilometres away in Solčava. The woman there was incredibly helpful and for €40 we were given a bed, fed a wonderful dinner and breakfast, and all our clothes and shoes were dried. There was also a terrific view of the Kamnic alps which we had just crossed. 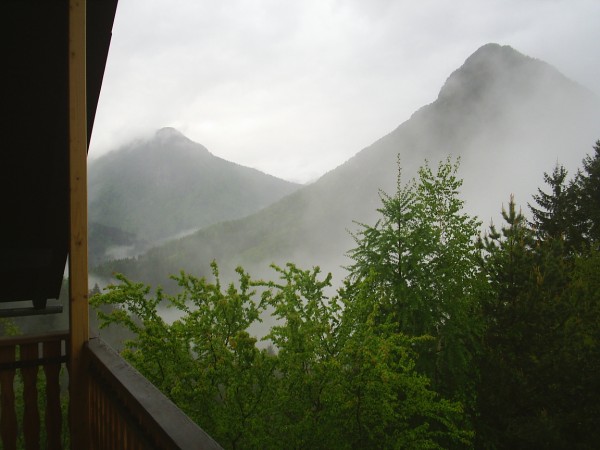 The view from the guest house

We had a bit of trouble packing the bikes for the plane because the bike boxes we’d managed to acquire weren’t big enough, but the flight was otherwise OK to Vienna. There we met a Canadian dude who, for a month long trip, had two small panniers and a handlebar bag. We felt a bit ashamed at the amount of gear we had. He had no wet weather gear (apparently the best way to assure good weather) and wasn’t intending on camping, though.

Vienna was an easy city for cycling about, and we did a bit of tourist work before going to bed in our rather comfortable hostel. The next day we caught the train to Maribor in Slovenia before starting to ride towards Dravograd. Getting the bike on the train in Vienna was easy – prepay, and the bike goes on.

We started cycling at around 2pm after grabbing some fruit from the fruit stand. It was an easy fairly flat ride up along the river Drava. Although it was uphill the incline wasn’t noticeable, and it’s a lovely river to ride along. The road had very little of a shoulder but the cars gave a wide berth and it was an easy ride. The only mishap was when Millerine braked suddenly to avoid running into a couple of chooks (yes, there were domestic chooks running across the road) and I ran up the back of her. I bent my front pannier rack but it was easy enough to bend back into shape.

There are no campsites in the area and with the steep river bank any useful campsite is hard to find. We ended up freecamping in the only comfortable spot we could find, which was in the town of Brezno beside the river.