We had originally planned to go back to Stockholm on this day, but all of the ferries were booked out. Rather than go for standby again we opted to book tickets for the 00:50 ferry at night. This gave us a very long day in Visby. Our plans of spending the day exploring the old town were foiled by a very heavy thunderstorm, which included a blackout from around lunchtime. We couldn’t walk around visiting the sites, and even our usual fallback when bored travelling, the movies, was out of action due to the blackout. Instead our day was spent hiding from the rain in bars and eating salad (the restaurants couldn’t cook anything). The best beer I’ve had in Sweden was from the local brewery and was stocked in all the bars, so it wasn’t all bad. Rather than being an enjoyable and relaxing day it was more of an uncomfortable and boring one. However candle lit dinners (and candle lit trips to the toilet) are always a memorable experience.

None of the websites indicated that you could put a bike on the ferry bus to Stockholm, but apparently you can if you’re lucky, and we were. There were two buses picking up passengers from the ferry to Nynäshamn. The first told us definitely no bikes, but the second told us there might be space if we waited. After us, five other cyclists arrived to catch the bus as well. Our driver chatted to the other and between them they managed to fit us all on. I think it’s much like catching a plane on standby – if the driver likes you and you’re a bit lucky you’ll get on. Smile, be courteous, and be there as early as possible.

So we arrived in Stockholm at about 6:00 am and had all day to kill. We started by dropping our gear off in the train station lockers then having a sleep in a park somewhere. After that it was a full day of Stockholm site seeing which was easily filled up. It was actually difficult to find time to fit in a few drinks. The outdoor museum and zoo Skansen was worthwhile and could easily occupy most of a day. We also happened upon a dog show where I met my first Australian sheep dog. They’re a gorgeous breed which look like a mix between kelpie, border collie, and blue cattle dog.

Stockholm is an excellent city for biking around. It has bike paths everywhere which are well sign posted and easy to follow, but it’s not crazy busy like Amsterdam. A lot of design effort has gone into making it a safe and easy place for cyclists. There were enough hills to make me glad to have gears, mostly around Gamlastan (the old town), but not enough to be bothersome.

Again we went for the separate cabins option on the ferry on the way home, but this time we were both in rooms with other people. I had a bunch of Russian dudes who weren’t bothersome in nature, but were in body odour. I stayed up playing blackjack and hanging around the various bars until I thought my tiredness would overcome the bad smell of the cabin. Still, the ferries between Tallinn and Stockholm have a reasonable enough range of facilities to be comfortable, and after combining that with a sunset over the islands I’d recommend taking it over flying if you can spare the time.

We found Gotland a very easy cycling destination. The ride from Stockholm takes about a day, and once there you are only limited by how many hours of riding you’re willing to do. It’s flat and well serviced by small villages, camp grounds, and B&Bs. The views aren’t spectacular, but it’s very relaxing place for a ride.

Millerine and I share a birthday, and this was it. We awoke fairly early and had completed the 35km to Visby by mid morning. We left the Gotlandsleden and took the shortest route along one of the main roads. It still felt quite safe, and there were no hills even though we passed through the middle of the island. 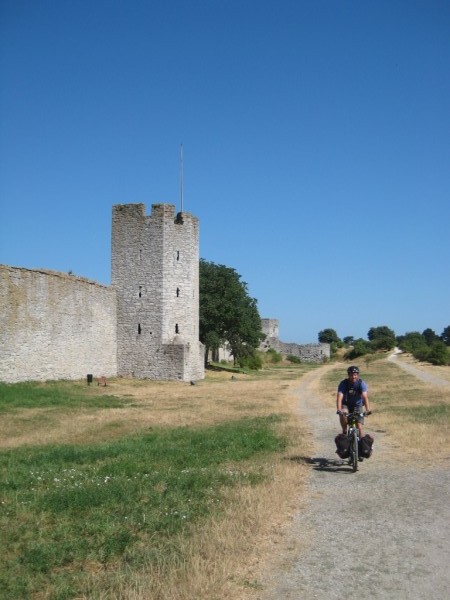 Outside the Visby town wall

Visby is a very attractive city with a well preserved city wall around the old town and a bunch of church ruins. St Katrins is possibly the most beautiful ruin I’ve seen. 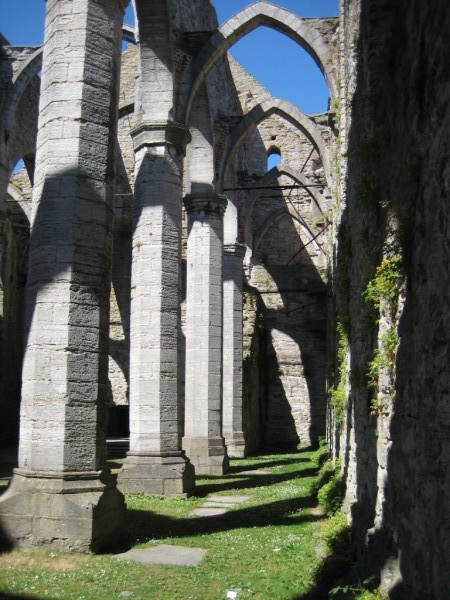 The ruins of St Katrins in Visby

The weather was hot and sunny, and perfect for walking around exploring (with frequent bar stops). We were also fans of the glassworks. Visby is definitely a tourist town, but not incredibly overcrowded and still very pleasant. 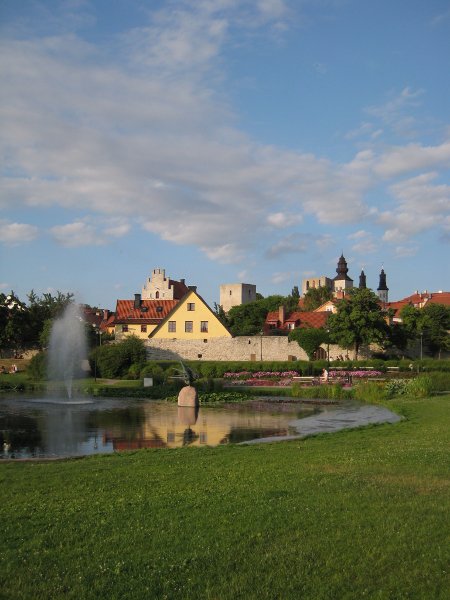 View of Visby from the park 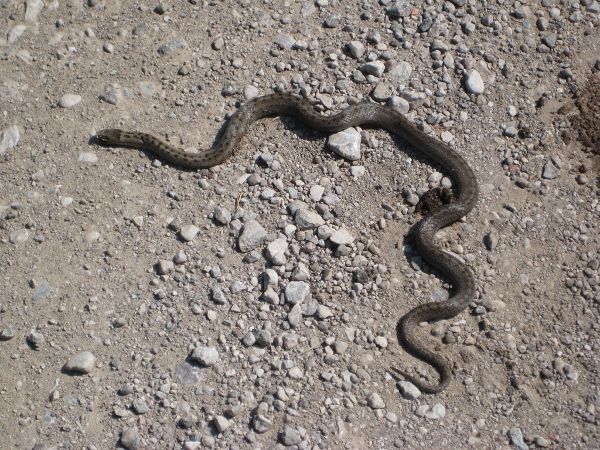 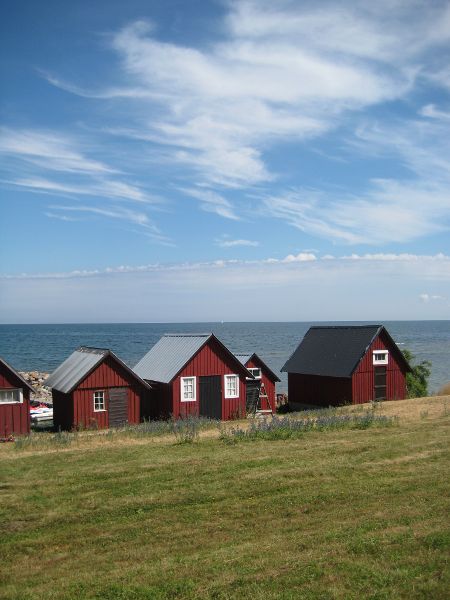 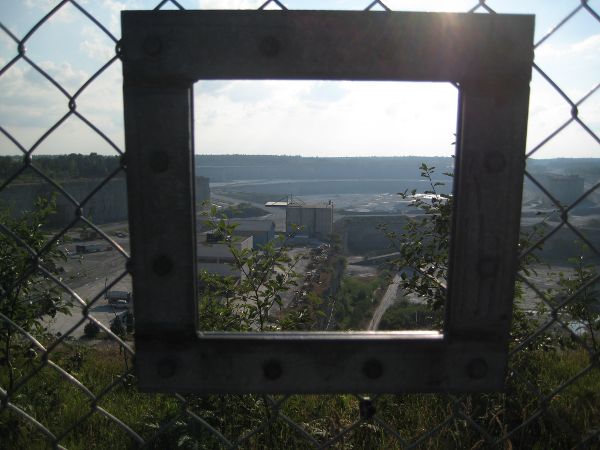 The ferry we went for was sold out, but they allowed us to get standby tickets and, after waiting in line with other cars and motorbikes for some time, we got on. They were expensive tickets for a three hour trip though – around 500 SEK each. There’s a very nice view of Visby as the ferry approaches. 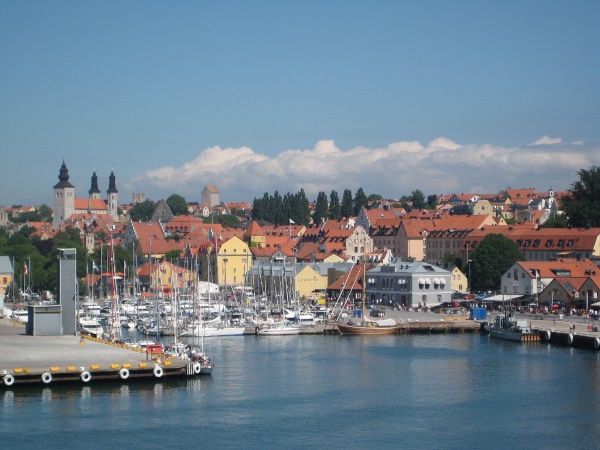 View of Visby from the ferry

Again there’s a bike route signposted immediately when you get off the ferry (Gotlandsleden). There were a lot of cycle tourists in Visby. Looking at the gear some of the bikes are carrying most of them were probably new to the activity. There were families with huge family tents, backpacks sitting in buckets on the rack, and even a rolled up foam mattress (a proper mattress, not a camping one) tied to a pannier rack.

We arrived in the afternoon and left from Visby at about 3:30pm. Following the Gotlandsleden north, it was flat apart from the climbs to get from the beach to the main road, and very little traffic. Even though it was a late start we still managed a stop to see the Lummelunda Cave along the way. It was a fairly regular tourist cave, but a little overhyped. Apart from Visby itself it’s one of the main tourist attractions of the island, but it would be OK to give it a miss.

Accommodation is easy to find in the area. We passed a few signposted campgrounds, and managed to find a small cabin for the reasonable price of 400 SEK at a “Mix Ranch” near Stenkyrka. The place had a bar and restaurant, and a bunch of goats and other animals on the property. 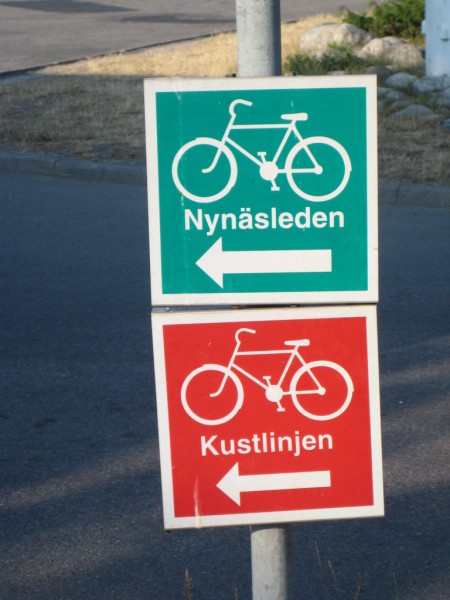 The ride to the ferry from our place in Viimsi is a pleasant ride by the sea. The Estonian bike route No. 1 starts in Pirita (near Viimsi) and goes into Tallinn and beyond. That part of it is entirely off road bike path and is mostly used by recreational cyclists and rollerbladers. It passes through the ferry terminal, which is very handy if your destination is over the sea. The ferry tickets to Stockholm cost 1900 EEK (130 euros) for two berths in separate single sex cabins and bikes. It was 3500 EEK if we wanted a cabin for the two of us and we went for the cheap option. It turned out there was nobody else in either of our cabins, so we just moved in together anyway.

The Tallin to Stockholm ferry ride went from 6pm to 10am and was non eventful for the most part, but there’s the opportunity to see a nice sunset and enjoy the bar. The ferry passes through a whole bunch of nice islands (the Stockholm Archipelago, and I think also the Ålands if you’re awake early enough.